HIS WORD MY HOPE SECURES

“Amazing Grace” is one of the most well-known hymns of the English speaking world. The tune is believed to have originated among African slaves and the words were written by John Newton. The song has several verses, some of which are not included in our hymnals. One verse often omitted is the verse that says: “The Lord has promised good to me, His word my hope secures. He will my shield and portion be, as long as life endures.”

This verse, like the others, has an allusion to several Scriptures. Moses issued a gracious invitation to his brother-in-law in return for his assistance in guiding the children of Israel through the wilderness of Sinai. He said, “Come with us and we will treat you well; for the Lord has promised good things to Israel.” – Numbers 10:29. The Hebrew writer, in an exhortation to weary and tired Christians said, “Let us hold fast the confession of our hope without wavering, for He who promised is faithful.” – Hebrews 10:23. God is our shield – Psalm 84:11. God is the lot or portion of the priests – Judges 13:33.

Have you ever considered what it is to make a promise? .. more ... 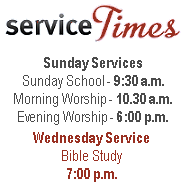